The Fair Finance Institute (founded in 2016), which is independent of the financial sector and political parties, would like to use the upheavals in the financial system as an opportunity to transition to an economically, ecologically and socially sustainable financial and monetary system. To this end, it utilises experience gained from other economic-social transformation processes, such as the energy turnaround (‘Energiewende’), for a ‘financial turnaround’ (‘Finanzwende’).
Markus Duscha is currently still working as a freelancer under the business name Fair Finance Institute. However, FaFin is expected to grow rapidly and be transitioned into another legal form. This new legal form will be selected in such a way that the orientation towards the common good is also represented through the organisational form.

Everything important at a glance

There is once again a stable monetary and financial system that naturally integrates social and ecological criteria into its main function: to serve the real economy and simultaneously preserve our natural resources.

The basic idea: Learn from the energy turnaround (’Energiewende’) and apply the knowledge gained for the financial turnaround (’Finanzwende’)

A socio-ecological turnaround towards an economically stable monetary and financial system is an urgent socio-political task, as was the energy turnaround starting in the 1970s. The energy turnaround (‘Energiewende’) is well on its way, even if it is still far from being complete. And a financial turnaround (‘Finanzwende’) as described above: Where does it stand?
To answer this question, it is useful to keep typical phases of major social transformations in mind:

This was also true for the energy turnaround. Markus Duscha provided consultation services for ministries, municipalities, citizens’ initiatives, energy suppliers, and many other stakeholders during phases 3 to 5 with his practice-oriented research and consulting at the ifeu institute starting in the early 1990s.

In FaFin’s view, the financial turnaround is comparatively close to the beginning in phases 1 to 3, depending on the thematic focus, and only in very few places is it in phase 4.

What were the success factors for the energy turnaround during these phases? Can they be transferred to questions related to the financial and monetary system? An example may at least illustrate the opportunities arising from this analogy:

One key factor for success was the municipalities, which adopted decentralised energy and climate change mitigation plans, tested new approaches and carried out pilot projects (mainly during phases 2 and 3 according to the above model). However, this did not stop at individual technical projects (such as individual solar energy systems). New political instruments were also tested and bundled into strategies (called ‘concepts’ or ‘plans’). One forerunner of the successful German Renewable Energy Act (EEG) was called ‘cost-covering compensation’ for solar power. It was introduced by municipalities such as Aachen through their municipal utilities (‘Stadtwerke’). In turn, this was vigorously promoted by very active local citizens’ movements (more information available here).

German municipalities, however, not only have municipal utilities, they also have municipal savings banks (‘Stadtsparkassen’). What pioneering roles could they play in a municipal financial turnaround? In addition, there are also many citizens’ initiatives and companies that are working on issues of sustainability, but they are not yet looking at the financial system. However, the example of the Network Money Compass (‘Netzwerk Geld-Kompass’) in Heidelberg clearly shows that this can be changed.

So how would it be to get municipal financial turnaround concepts on track? Concepts to develop something new that can be used as a model for wider policy frameworks (from phase 3 to phase 4), hopefully not too late, i.e. before the next collapse of the financial sector.

The founder of FaFin has many other ideas that can be transferred from the energy turnaround to the financial turnaround. To name at least one further approach, this includes intensified strategic networking of social forces that recognise the necessity of changing direction. By joining forces, it is easier than before to build up the political pressure needed for the broad implementation of the necessary changes.

Of course, there are many factors that cannot be transferred from the energy sector to the financial sector without adaptation. This includes the fact that the framework conditions are much more international. However, pressure to change is very high in the industry due to digitisation, ongoing financial and monetary crises, the ECB’s low interest rate policy and other regulations. This can be deliberately utilised as an opportunity to create more sustainability!

The Fair Finance Institute provides strategic consulting, research and design services to create tailored, pragmatic solutions for the various phases of transformation on the path to the financial turnaround.

The upcoming tasks to be carried out to make the financial system economically, socially and ecologically compatible are spread out over a number of subject areas:

The Fair Finance Institute offers its services for all of these subject areas, if necessary in cooperation with corresponding experts who have special expertise in specific areas from the FaFin Network. This combination of all four aspects mentioned above makes FaFin different from most other organisations that offer services related to the financial system. 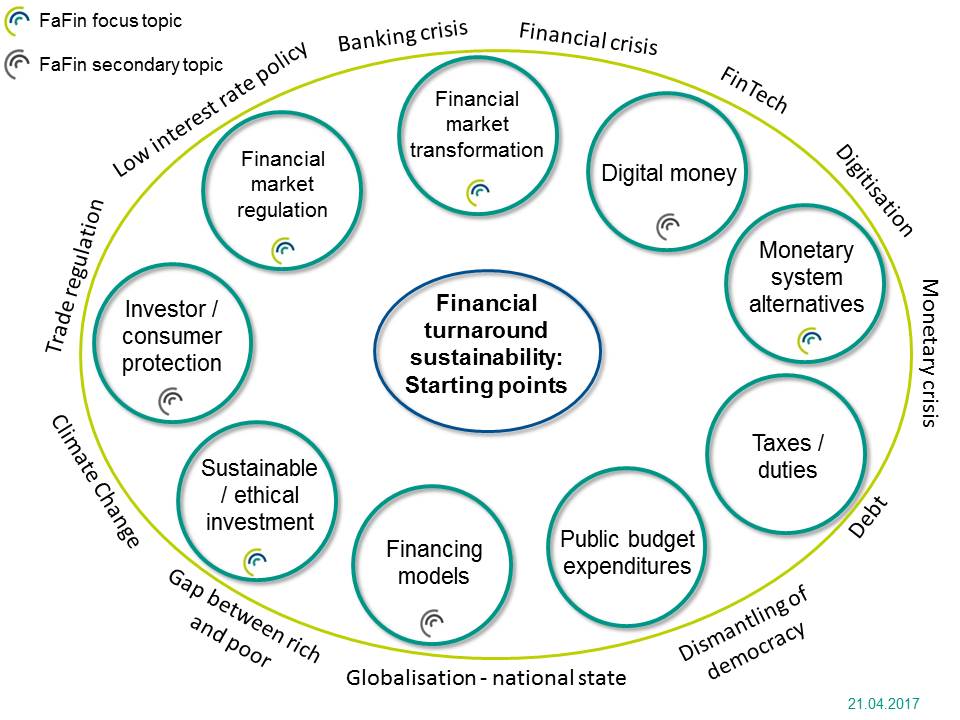 Markus Duscha
Markus Duscha, the founder of the institute, has more than 30 years of experience in strategic political consulting and research for sustainable development. Before founding FaFin, he worked at ifeu – Institut für Energie- und Umweltforschung Heidelberg gGmbH , among other things as managing director and previously as department head for topics related to the energy transition. Since 2014 he has focused on the necessary restructuring of the financial system. Further information here in the next section and on LinkedIn.

Walter Kern
Walter Kern is a financial specialist (FH) and, as a certified financial planner, supports entrepreneurs and private individuals in the sustainable alignment of their finances. He is involved in the Rhine-Neckar regional group of the common good economy movement (‘Gemeinwohlökonomie-Bewegung’) and in the Geld-Kompass Heidelberg network, which advocates sustainable development on the topic of money in the region. At FaFin he is an important partner in selected projects and the further development of FaFin. For further information, please see LinkedIn.

Anna-Lena Hock
Anna-Lena Hock studies Business Administration M.Sc. in the fourth semester at Humboldt-university in Berlin. Her academic focus is on energy economics, finance, data analytics and accounting. She is a working student at FaFin. For further information, please see LinkedIn.

Markus Duscha, the founder of the institute, has more than 30 years of experience in strategic political consulting and research for sustainable development. Prior to the establishment of FaFin, he served for five and a half years as managing director at the renowned ifeu – Institut für Energie- und Umweltforschung Heidelberg gGmbH and thirteen years as the head of the department for topics related to the energy turnaround. Since 2014, his focus has been on the necessary restructuring of the financial system.

In particular, he brings the following skills to FaFin:

Markus Duscha is involved in the following organisations, associations and institutions:

Below is a selection of partners that FaFin is in close contact with and cooperates with, depending on the project type.